How to Defend Your Pro-Life Views in 5 Minutes or Less:

3. Challenge people to be honest and consistent.

“I was adopted nearly from birth.  At 18, I learned that I was conceived out of a brutal rape at knife-point by a serial rapist.  Like most people, I’d never considered that abortion applied to my life, but once I received this information, all of a sudden I realized that, not only does it apply to my life, but it has to do with my very existence.  It was as if I could hear the echoes of all those people who, with the most sympathetic of tones, would say, “Well, except in cases of rape. . .  ,” or who would rather fervently exclaim in disgust: “Especially in cases of rape!!!”  All these people are out there who don‘t even know me, but are standing in judgment of my life, so quick to dismiss it just because of how I was conceived.  I felt like I was now going to have to justify my own existence, that I would have to prove myself to the world that I shouldn’t have been aborted and that I was worthy of living.  I also remember feeling like garbage because of people who would say that my life was like garbage — that I was disposable.” Rebecca Kiessling, International Pro-Life Speaker, Attorney ♥~♥~♥~♥~♥~♥~♥~♥~♥~♥~♥~♥~♥~♥~♥~♥~♥~♥~♥~♥~♥~♥~♥~♥~♥~♥~♥~♥~♥~

How many U.S. abortions are performed each year due to rape, incest, and danger to the life of the mother?

According to the pro-abortion Alan Guttmacher Institute, about 1% of the 1.3 million abortions committed each year are due to rape or incest. For more on rape and abortion, see: http://www.dakotavoice.com/200611/Guest/… http://www.deathroe.com/Pro-life_Answers… http://www.afterabortion.info/Victims/in…

Confused About Stem Cell Research? A Pro-Life Primer Much of the confusion over stem cell research involves misunderstanding of terms, so let’s begin with some definitions. http://www.lifenews.com/2013/05/20/confused-about-stem-cell-research-a-pro-life-primer/

Thanks to technology and amazing insight, a new resource has been launched that gives us a never-before-seen, in-depth look at life in the womb. Author Alexander Tsiaras has recently launched the book Conception to Birth: The Visual Guide to Your Pregnancy as an interactive iBook format.

His work is a mix of creativity and science, giving vivid visuals to fetal development. Feeling limited by the printed page, he goes further than just static images. Tsiaras develops highly detailed 4D animations derived from microMRI and other imaging techniques. In fact, he created a series of 40 videos documenting each week of pregnancy.

The iBook format lends itself for even greater interactivity. Images are 3D and can be rotated and examined close-up. Layers of embryonic and fetal anatomy are represented. Thorough text details each stage of development, accompanied by specific information for each trimester. For example, you can see what the baby looks like at 6 days after conception, at 6 weeks and 6 months.

Imagine how this resource can be used by pro-life educational environments and pregnancy care centers to help save babies’ lives.

Our God is an Awesome God!

“Laminins are a family of proteins that are an integral part of the structural scaffolding of basement membranes in almost every animal tissue.” You see…. Laminins are what hold us together… LITERALLY. They are cell adhesion molecules. They are what holds one cell of our bodies to the next cell. Without them, we would literally fall apart. Here is what the structure of laminin looks like… The glue that holds us together…. is in the shape of the cross.” 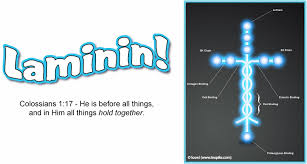