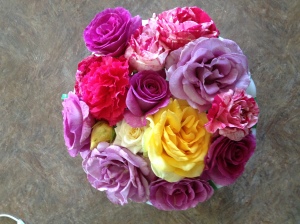 Curled up inside his mother’s

He’s the one they didn’t plan on.

He’s an extra mouth to feed,

Neither of them need.

And a house that is a mess.

He could have been a newer car

Or a cabin with a view

Or a cruise, or clothes or Vegas shows

Or other dreams come true.

So, they talk about abortion

For that fetal imposition

Who would change the way they live.

He was just a misadventure

They happened to conceive.

They sit there in the waiting room

With the papers they must fill,

The waivers and consent forms,

And arrangements for the bill.

They know it’s what they have to do.

There is no other way

But once or twice they wonder

“I wish you wouldn’t do this.

I’ve got too much to do.

I have to learn to walk and talk,

To dress and tie my shoes.

“I have to watch for Daddy

With Mommy at the door

And I Have to ride in shopping carts

When they take me to the store.

“I have to blow out candles

On a lot of birthday cakes

And pose for all the pictures

“If you let them do this

I’ll never have a birthday.

I won’t even have a grave.

And I’ll never laugh or cry.

I won’t even have a name

And I’ll always wonder why.”

“This Country is now going through many changes and how one votes will govern for a person’s Lifetime and all of those they love, the young and the Old. The vote should not be taken lightly.

God blessed this Country and it Prospered because the Leaders were Wise and Spiritual men. And the Constitution was created for us to live by. People worked hard and made a good life living by God’s law. Today there are those who try to take God out of the Political Platform.

I myself will look at God’s laws, one being ABORTION – Thou shalt not kill –God’s Future Generation. Who is for this Law, who is against it? Another word is murder. If one will look to see, there are other Laws against God. God gave also “freewill” and the warning “What one sows one surely will reap.”

We have been given “Great Power” the “vote”. I ask you to Pray, think wisely, and use it. Please do not waste it, not only nationally, but also on State and Local levels. Please pray for America.”

“Their screams are never heard by man:

But fall upon our Master’s ears

When fetus is taken from mother’s womb

Thru anguish, pain and tears.

She’s too young to become a mother,

And the father is yet a boy,

But should they have left my life go on,

I would have brought them endless joy.

For I was more than cells and molecules;

And I had a beating heart.

But they said I was not human yet,

And my life was torn apart.

So into the suction cup of death went this,

They took this perfect creation

And stilled its throbbing heart.

As tears rolled down our Master’s face,

And into Heaven a soul was hurled —

A childlike voice was heard to say –

“You weren’t fair to me;

You Didn’t Give Me A Chance

“I could have been a movie star, upon the silver screen

I could have been an Olympian, living out a child’s dream

Dressing up for an evening out, to go to my Senior Dance

With the one who may have been my love, But I’ll never get the chance

I could have been a teacher too, helping a child’s wisdom grow

I might have been a minister, who helped worldly wounds to mend

I could have raised the standard, but that was put to an end

He’d say, “Someone’s going to be lucky, with me close by their side”

I will not get to, just, lay back and look to the bright blue sky

And experience the wonder of a rainbow, to see the colors eye to eye

I do not understand the reasons they let me go

My unborn life was taken for some minuet circumstance

I could have been, so many things with God’s help from above

I could have even showered you, with all my precious love

Many others, like me, will meet this fate and be denied the chance to grow

Who will wipe God’s precious tears?  When from His broken heart they flow?

The Light Went Out

“Once there was a country

The light shone all over it

Within there was no flaw.

It received so many blessings

The harvest was very high.

You never heard of killings

Of souls He sent to Earth.

Really knew their worth.

Man was married to woman

According to natural way.

Then the Devil stepped in

Tried to head them all astray.

“Have some drugs,” he offered.

“I will really make your day.”

The light was gradually dimming

for many chose this way.

The laws, the Ten Commandments,

was taken from the public eye.

In schools there was no Jesus

Confusion one could espy.

Less clarity to the eye.

What people are doing this to us?

Why do they think this way?

Am I gradually losing my freedom?

What do I do each day?

Why am I allowing this?

As a Christian I’m supposed to see.

Who wants these ways, I ask you

How did this come to be.

I faced myself quite fully

In truth, I must admit

Always I was too busy

But life shouted right back at me.

Realize what it’s all about

“Jesus or the Devil”

The light went out.”

Inspiration given to Phyllis Stover

The cry of an aborted child

This poem came to light recently courtesy of my nephew who found it hidden among the usual family documents.It was written in 1969 by my late brother John who was a great influence on my own Catholic faith and whose example probably was the main guide to my own orthodoxy.John wrote the poem following a newspaper report (22nd May 1969) regarding an aborted baby crying out while on its way to the incinerator – a thought that is hard and abhorrent to contemplate.“Hear me O God.  Hear.
From the depths of my condemned cell I cry.
None will hear me but You because You see,
I have no vote.
I did not murder nor did I steal or wound.
Yet I am held here helpless before the sterile steel.
Or the poisoned needle.
A death too brutal for murderers is a death
reserved for me.
No comforting breast nor loving Mother’s arms await me.
My body will be given to be burned.
What have I done? I have not earned
this sordid unlamented end.
In sin was I conceived. Unwanted I die
before I shall be born.
O when the metal enters my brain,
when I shall kick my last convulsive agony,
take me, take me to Your arms.
None will console me, none cherish me.
None hear my last suffocated
shriek from the traitorous womb.
Save You, save only You.
O love me God.”John Francis Collins RIP
http://linenonthehedgerow.blogspot.com/2013/02/the-cry-of-aborted-child.html
♥~♥~♥~♥~♥~♥~♥~♥~♥~♥~♥~♥~♥~♥~♥~♥~♥~♥~♥~♥~♥~♥~♥~♥~♥~♥~♥~♥~♥~
America In Danger
“Looking in the sky you can see the magnitude of God.
He made this earth millions of years ago &
Has done a wonderful job of looking after it.
In the beginning there was God then the devil – Good and Evil.
God gave oil, coal, gas and all for the needs we his children would need
For a good life also his book the Bible for our direction and safety for
A good and prosperous life.
He made male and female to go together to replenish the earth
And to show love to each other and Commandments for a
Good life “Thou Shalt Not Kill” being one of them.
“Abortion” comes under this Commandment
which is against“God” and pleases the “devil.”
Republican” is a man made name
Democrat is a man made name
One has free will who to vote for.
What one votes for is the kind of life you will get.
God’s Laws which brings Prosperity or the
Devil’s Laws which brings need and unhappiness.
When one votes they should look to the way one should vote
For God? Or for the devil?
Who is for ABORTION
Go through the Ten Commandments and
Look to who follows God’s Laws.
If you take a seed with no life in it
And plant it you will wait forever for it to grow.
It’s not alive.
The sperm has life in it before it comes from the male
And is implanted into the female hence it grows.
It could not even start to grow if not already alive.
Sent from God to replenish his earth.
Pray for people to realize and to choose wisely
When they vote.”
By Phyllis Stover